In the cool clean air of the changing season, at a remote estate in the forested hills of Wisconsin, some of the world’s foremost climate scientists gathered with an air of urgency.

They gathered for a two-day conference to discuss their latest research on abrupt climate change. At various points in our planet’s recent history, the climate has shifted very quickly and very dramatically. Leading scientists believe that the human thirst for fossil fuels could be driving us to another such tipping point.

For these scientists, the solution lies in unlocking the past in order to predict how climate is likely to act in the future.

Larry Edwards of the University of Minnesota can peer as far back as 700,000 years with natural chemical tracers of precipitation and warming locked in the stalagmites of caves in China and Brazil. Scott Stine of Hayward University is tracking the pace of drought in California. Meredith Nettles of Columbia University is measuring the force of “icequakes” generated when the Helheim Glacier in Greenland fractures as it melts, tumbling huge bergs of ice into the sea. 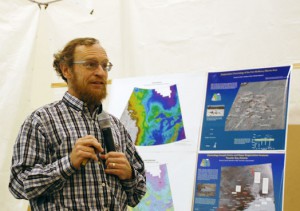 In Wisconsin, the conversations among colleagues started each day over omelets in the dining tent and ended the final night over a picnic bonfire in a shaded glen. But the formal conference presentations made it clear that scientists have zeroed in on three questions that may hold the key to understanding – and averting – abrupt climate change. They questions focus on identifying  the triggers of climate change, learning how the northern and southern hemispheres differ in response and hunting down the  role CO2 plays in driving global warming.

“We know that we are changing the composition of the atmosphere,” said Richard Alley, geosciences professor of Pennsylvania State University and the unofficial emcee for the conference.

He has traced climate change back tens of thousands of years and other colleagues have tracked data far deeper into the past in what Alley calls a time machine of glacial ice cores that have trapped ancient pockets of air. The pockets show that carbon dioxide levels, currently at about 380 parts per million in our air, never rose above 280 ppm in previous warming cycles going back hundreds of thousands of years on the Earth.

Alley launched the talks with a primer on where science stands now in terms of temperature models. We will most likely see a warming of up to 11 degrees Fahrenheit over the coming decades, Alley warned, pointing to a graph from the International Panel on Climate Change. The graph has a long tail because, although unlikely, catastrophic warming of more than 20 degrees might be possible.

“If there’s a probability that you’re gonna get run over by a truck, you should probably have insurance against that,” Alley said, referring to the worst case scenarios. “That’s what we are doing in here [at this conference]. Because abrupt climate change is the truck of the climate system that might run over you.”

The outcomes depend on what actions we take and Alley indicated that taking action now makes sense from both business and ethical perspectives.

“If you want to make people wealthy, coupling a climate model with to an economic model typically says that investing now pays off. If you want to be fair to other people – most of the damage from global warming happens to poor people in warm places, most of the global warming is being caused by wealthy people in cold places – then [the] ethicists I’ve talked to say you invest more now,” Alley said.

The conference was hosted by the Comer Science and Education Foundation, the philanthropic organization created by Gary Comer, founder of Lands’ End apparel and catalog business. Comer, who died in 2006, was struck by the enormity of the climate crisis when he sailed his yacht through the relatively ice-free Northwest Passage that skirts the upper coast of North America through the Arctic Ocean. He set up his foundation to fund research in the field of abrupt climate change and his adult children Stephanie and Guy Comer run it now.

Early on in his mission, Gary Comer approached Wallace Broecker, one of the pioneers of climate change science who is a geophysicist with Columbia University’s Lamont-Doherty Earth Observatory. Comer’s support provided a state-of-the-art geochemistry facility at the observatory. But much of the funding insured a future generation of researchers with money for graduate and postdoctoral fellowships mentored by leading climate scientists such as Alley and George Denton, professor of geological sciences at the University of Maine. Denton is an expert on glaciers and traces they leave behind. Fellowships funneled through dozens of other mentors followed.

The study of abrupt climate change is an ambitious undertaking — true understanding requires a sort of grand unifying theory of the Earth’s forces. It requires a multi-disciplinary approach of scientists such as Alley, who study ice cores, collaborating with people studying sediment samples from the bottoms of oceans and steep moraines left by the advance and retreat of glaciers. The layers of geology map the history of our climate.

The map indicates that, at various times in the past, the earth’s climate swung wildly from warm periods to ice ages, sometimes in the space of mere decades or less. Scientists at the Wisconsin conference said they worry these abrupt changes might loom in our near future as we add billions of tons of greenhouse gases to our atmosphere every year.

Over the past few years, climate scientists have made extraordinary progress gathering data. Yet, despite the progress that’s been made, many fundamental questions about how the climate functions still need to be researched and answered.

Denton pinpointed some of the global mysteries evading our understanding of how the hemispheres interact. He presented the latest findings from his team as they date glacial moraines in South America and New Zealand. Scientists are unsure how climate changes in the Northern Hemisphere impact the climate in the Southern Hemisphere.

Most of the Earth’s landmass is in the northern half of the planet while most of the Earth’s ice is in the south locked in the enormous ice covered continent of Antarctica. Each hemisphere responds differently to changes in climate, and scientists are still learning how the two hemispheres interact.

On long time scales, it appears that the climate in both hemispheres is impacted by how much sunlight the Northern Hemisphere receives as the orbit and axis of the earth cyclically change over tens of thousands of years. “How the Southern Hemisphere responds to orbital change is a major problem, which I call the southern problem,” Denton said.

“Another problem has to do with the trigger of the northern abrupt climate changes,” Denton said.

Broecker offers one explanation with a global ocean conveyor belt that he discovered, a circulatory system that brings warm tropical water to the North Atlantic where the heavier, cold water sinks and pushes its way back south. If that conveyor belt is slowed or stopped, a chain reaction could plunge the North Atlantic in near ice-age temperatures, bringing severe winters to places such as London and drought to fertile areas of the northern tropics, Asia and Africa.

Scientists including Denton are looking for hints of this process in Thunder Bay of Lake Superior where lake waters flooding into the Atlantic as ice age glaciers retreated may have unleashed another serious climactic cold snap called the Younger Dryas. This mini-ice age froze out a warming cycle some 13,000 years ago. “We’re looking for the geomorphic evidence in Thunder Bay” where something should be left of channels ripped open as the water burst through, Denton  said..

But he said that, while the conveyor system may play a part in an abrupt change in climate, the data suggests that there is still more to the equation.

“To my mind, this remains the great unsolved issue of abrupt climate change,” he noted.

“CO2 is so important in that it certainly is part of the reason the temperature changed,” Broecker said. “But it would be much more satisfying to know why CO2 changed.”

While the scientists at the conference agree that carbon dioxide released by human activity is causing the warming cycle of the atmosphere today, they are uncertain how the natural mechanism of CO2 buildup works and what it could mean for our current predicament.

Columbia geophysicist Klaus Lackner stood out with a solution. He talked about a new scrubber technology that can capture and carbon dioxide from the atmosphere so that it can be stored away.

The innovation developed by Lackner and Global Research Technologies, a company based in Tucson, Ariz., is cxurrenlty a working prototype. Lackner said that a full-scale machine the size of a large shipping car will be able to suck a ton of carbon dioxide a day out of the atmosphere while consuming a modest amount of electricity and dirty water.

Broecker said he was skeptical of Lackner’s invention at first but he applauded it both at the conference and in his recent book “Fixing Climate” as a hopeful solution in a world where increasing use of coal and oil is likely to continue.

It only seemed fitting that such scientists gathered in a renovated airplane hanger at the estate nestled in a rolling countryside once covered by glaciers. They returned to their universities and field research after the conference on an unusually hot fall morning with the momentum of an astounding array of research to consider.