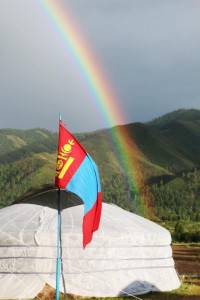 This fall, Alley and other leading climate scientists met to build a clearer understanding of earth’s climate history at the Comer Abrupt Climate Change Conference.

Their efforts to identify natural climate variations in the past are shedding clues on the current patterns of climate change. And that can point the way to solutions with both environmental and economic benefits, Alley says.

From Jeff Severinghaus’ research about the West Antarctic Ice Sheet Divide to Nicholas Young’s analysis of glaciation on Baffin Island, scientists at the conference span the world and eons of time for their research. By collecting the fingerprints of ancient air pockets or long lost glaciers and constructing models from their findings, they piece together the climate puzzle. At the conference, Comer scientists presented their latest work—on glaciers, oceans and dust—to show what we know, how much more there is to learn, and why we should cash in on the solutions now. 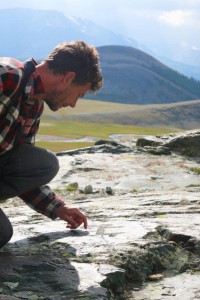 Photo at top: Sheep graze in front of the research camp site near the Lower Eg River in Mongolia where Comer climate scientist Aaron Putnam, a Columbia University geochemist, teamed up with biologist Olaf Jensen of Rutger’s University this summer to understand Mongolia’s past and current climate and clues they reveal for global climate models. (Jennifer Draper/Medill)

Photos at right: A rainbow appears above a ger at base camp in July near the Lower Eg River in Mongolia. This location was the first in several fieldwork sites. (Jennifer Draper/Medill)  Putnam points out a petroglyph in the rocks near the Altai Mountains in western Mongolia. He and his research team collected samples of granite boulders to track the rise and retreat of ancient glaciers. That way, Putnam can pinpoint past climate changes to help predict what’s in store for us now. (Jennifer Draper/Medill)