What may come as a surprise to some is that Chicago and the Midwest aren’t alone – the hottest year on record hit the entire United States and rest of the globe. And 2015 follows a string of recent record-breaking warm years linked to global warming.

This uniform warming is “the big story” of weather data in 2015, said Gavin A. Schmidt, director of the Goddard Institute for Space Studies at NASA, and Thomas R. Karl, director of NOAA’s National Climate Data Center, at a media conference call on Wednesday.

“It’s record warmth that was spread all over the world. All the oceans participated, from the tropical Atlantic to the Pacific to the Indian Ocean and many continental areas including South America, Central America, Asia and Europe,” said Karl. 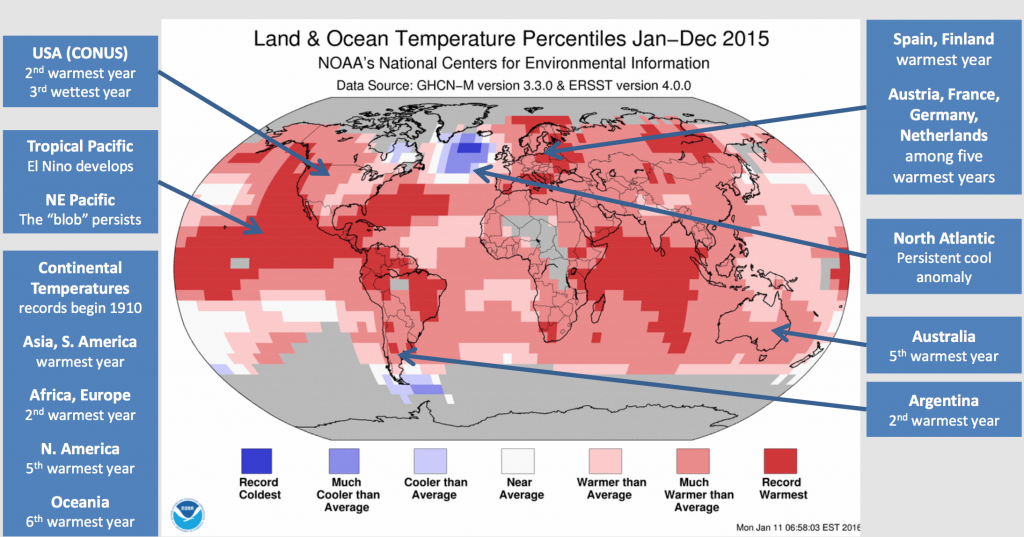 Courtesy of NOAA-Map of Local and Global Temperatures for 2015

Although shivering Chicagoans may not feel the one degree Celsius (1.8 degrees Fahrenheit) increase in temperature from baseline temperatures set in the 19th century, we all felt the warmer October, November, and December experienced across the globe.

“Ten of the 12 months have the warmest global temperatures. Two months – January and April – did not break the record. That’s the first time we’ve seen that 10 out of 12 months break the all time previous global average temperature [record]. You can see in December and in autumn, records have been broken by substantial margins, much more than what we saw earlier in the year,” said Karl. 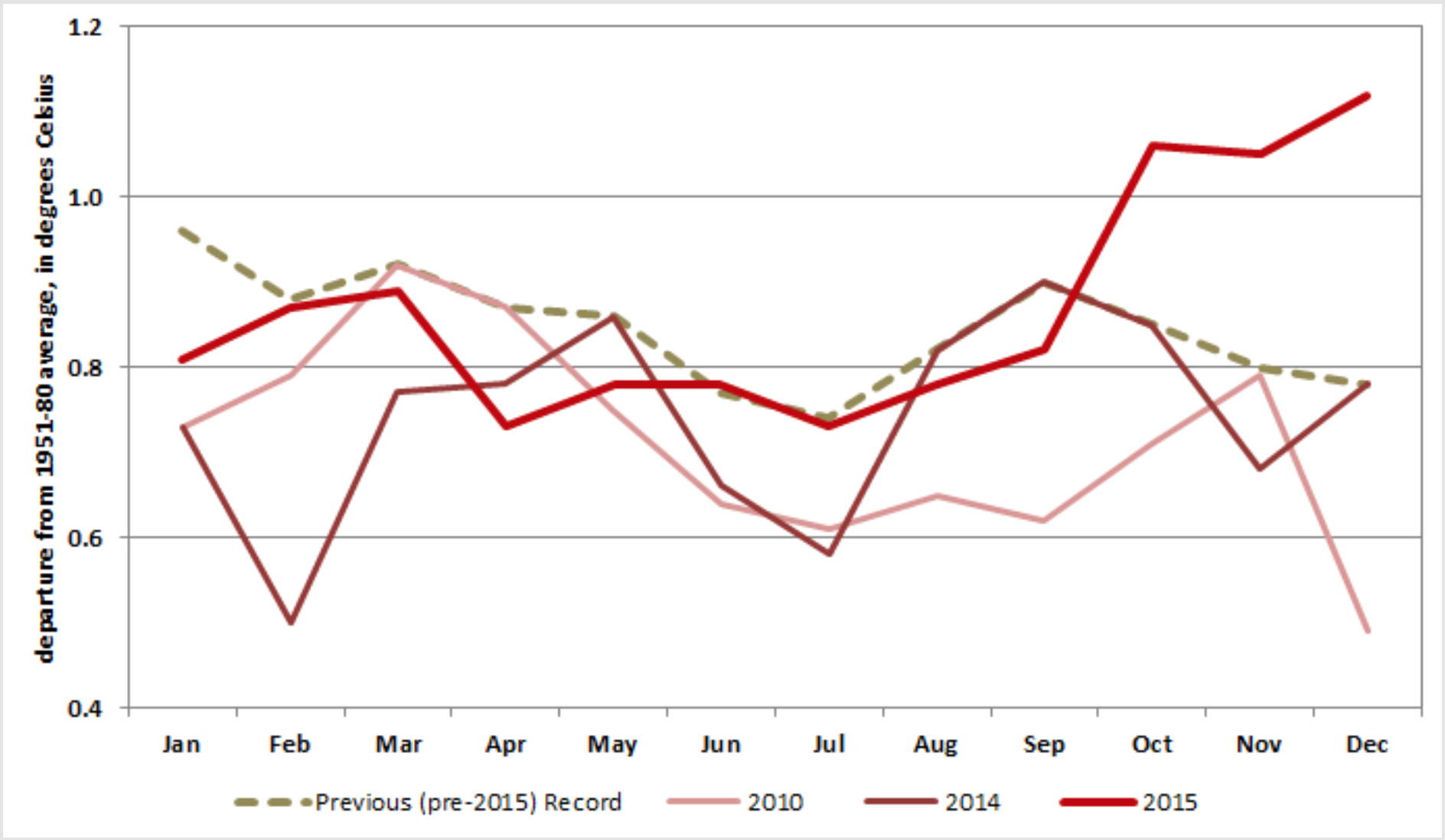 Courtesy of NOAA/NASA-Map of Global Temperatures for 2015
If the unseasonably warm weather in Chicago during the fall and winter months seems familiar that’s because 2014, previously held the record for the warmest year. But in 2015, Schmidt said a combination of natural phenomena like El Nino added to human-forced climate change, giving temperatures a push that beat the 2014 record.

“When we do have an El Nino event going on, you do see a progressive warming of global mean temperature and in almost all cases El Nino starts and annual temperature responds maximally in six months – four to six months,” Schmidt said. “The trend over time regardless of the El Nino phase is why we’re having a record warm year. If it was just an El Nino year, it would be like the other years. The reason it is such a warm record year is because of the long term underlying trend.”

But with nobody in Chicago complaining about the warmer weather, and only a one-degree change, is the warming trend something to worry about?

“The fact there are winners and losers under warming is one of the reasons why it’s so difficult to get widespread agreement about trying to restrict the human impact on climate,” said NASA climatologist Claire Parkinson, of the Goddard Space Flight Center.

Parkinson used the analogy of “the Great Smog” in London in 1952. Smog caused by over-burning coal for heating and industrial fuel killed thousands of people in one week. Nobody was concerned about air pollution before, but after people died the Clean Air Act of 1956 was passed to address pollution in England.

“If we don’t do anything about climate change, it hurts a lot more.” – Climatologist Richard Alley
The same can be said for the warming trend.

“We’re fairly committed to the second degree [Celsius] and it starts to move us outside of experience,” said climatologist. Richard Alley, a geosciences professor at Penn State and a frequent expert sought by Congress to testify on climate change.

The analogy Alley uses to explain what might happen if the warming trend continues is to just imagine you’re a gardener in Chicago.

The temperature is one degree Celsius warmer and doesn’t affect the garden you’ll be planting. But what if it gets warmer yet and you can no longer plant the vegetables you normally do? You might have to find alternatives that grow in warmer climates. And what if it gets even warmer, so warm that even the plants that usually grow in hotter climates can’t grow?

On a larger scale, experts already point to changes in crops and harvests that could threaten breadbasket states such as Illinois and Iowa.

“If we don’t do anything about climate change, it hurts a lot more. Long term the failure [to act] will be much more costly,” Alley said.

We can all make a difference. There are many preventative measures we can take to help slow climate change.

“We should do as much as we can within reason. We can’t stop impacts altogether. But we certainly can try as hard as we can to limit how much we are pouring into the atmosphere and into the oceans and try to limit that,” Parkinson said. “There are all sorts of ways as individual people and as a society.”

Parkinson’s suggestions are easy to adopt: recycle more at home and when eating out, take public transit instead of driving to school or work, and Skype into meetings instead of flying long distances.

Even with a frosty January in Chicago, global temperatures are rising. (Photo by FLICKR user)