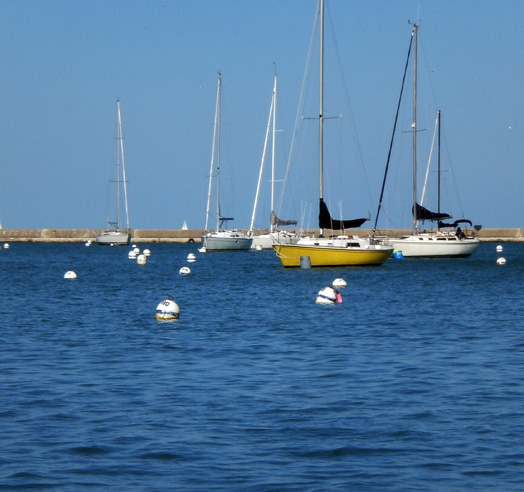 If you ask Chicagoans to draw a map of their city, the first line on the page will likely be a slightly angled north-south axis. Everything west of the line is urban territory. Everything east of it is fresh water.

Lake Michigan and the Great Lakes contain one-fifth of world’s surface fresh water – 6 quadrillion gallons of it. But is Chicago an aquatic paradise, immune to worldwide water shortages that are accelerating with global warming?

Scientists here say the answer is no. “There are estimates that industrial and economic development will be limited by water in the city of Chicago within the next 20 years,” says Aaron Packman, professor of Civil, Environmental and Mechanical Engineering at Northwestern University.

Though the Great Lakes are vast, water extraction from them is limited under the legally binding Great Lakes Compact. Most Chicago suburbs cannot obtain their drinking water from Lake Michigan. “Go a county or two to the west or south, where they must use groundwater [from aquifers]. Those sources are rapidly becoming depleted,” says Seth Snyder, a colleague of Packman’s at Northwestern and chief of water research at Argonne National Laboratory, a world-renowned science and engineering research center located on a sprawling campus 30 miles southwest of the city.

Packman and Snyder are two of the principal researchers at the Northwestern Argonne Institute of Science and Engineering (NAISE), a partnership between Northwestern and Argonne. Although Argonne was founded in the 1940s during the Manhattan Project, NAISE is one of dozens of programs that now use the facilities to develop state-of-the-art technologies for sustainability, energy and other applications.

One such breakthrough is a desalination and water treatment process called resin wafer electrodeionization (RW-EDI). RW-EDI is extremely energy-efficient as compared to traditional desalination methods. The porous resin wafers require very little voltage to power electric fields as part of a system that filters out impurities from water. The technology has been proven to function in a commercial setting – a scale roughly 100 times larger than the “mini-stacks” of wafers built at Argonne.

Resin wafer technology plays a vital role in NAISE’s plan for more efficient food, energy and water use on a systemic level. Recovering the 1 billion gallons of treated wastewater that the city dumps into the Chicago River every day “will more than triple available water,” says Snyder. The reclaimed water could be used for industry and agriculture.

“That’s a big part of the game,” continues Packman, highlighting the fact that industry and irrigation account for roughly 90 percent of national water consumption. “If you could take sources that are lower quality than the ones we would normally use for drinking water, and link them to users who don’t need the quality of water we would normally have for drinking water, this opens up whole new pathways for water use.”

Packman, Snyder and Yupo Lin, a chemical engineer who leads the resin wafer project at Argonne, are featured speakers at a Taipei symposium on August 5 and 6 tackling global resource management. Hosted by National Taiwan University (NTU) as part of their ongoing international collaboration effort, the conference will cover clean water technologies, the Urban Food-Energy-Water Nexus, and green infrastructure. The technologies being developed through the Northwestern-Argonne partnership have crucial implications for an island nation like Taiwan, which receives influxes of freshwater only through typhoon rains. “Water is hard for them,” says Lin, who holds over 20 patents related to his resin wafer work. “The keywords we’re looking for are ‘new water sources.’”

The Northwestern-Argonne team will also be learning from the success of their NTU partners and other scientists at the symposium who are developing models to measure the overall inputs and outputs of urban systems. “Imagine the amount of food, energy and water going into and out of the city of Chicago,” says Packman. “It’s very hard to track. We’ve been working on things like urban water systems data collection with distributed sensor networks. They’ve been able to do that in Taiwan. This gives us some basis to make some connections together to improve understanding of cities both in Taiwan and the U.S.”

While this work on the Food-Energy-Water Nexus could help solve problems for the global community, it should also be a boon to water-rich Great Lakes economies, which Synder feels should be a leader in attracting business with water reuse programs. “Just like you should install photovoltaics in Phoenix, water-intensive industries should be in the Chicago region,” he says. “We are working on enabling that vision.”

This intersection of efficiency and economic development led to the establishment of a non-profit called Current in 2016. Founded by World Business Chicago, Current is a public-private partnership that serves as an “innovation platform for the Chicago region’s water industry to leverage its strengths for global environmental and economic impact.” Current partners with the city and the Metropolitan Water Reclamation District of Greater Chicago (MWRD) to implement the technologies being developed at Argonne. (MWRD is the independent local government agency that manages the region’s wastewater and storm water.)

This weekend’s conference is being hosted in honor of the 40th anniversary of NTU’s Graduate Institute of Environmental Engineering. Participants are also eager to fulfill the promise of increased international collaboration. “We were invited,” says Packman, “both to celebrate prior achievements and to explore new opportunities.”