The oceans have always held carbon dioxide (CO2) in their vast blue depths during glacial and warm periods throughout Earth’s history, breathing it in and out as the climate warmed or cooled. Scientists are now fishing for clues from the floor of the sea to reconstruct past climate events via ocean chemistry to better understand what’s coming in the future.

The oceans have been absorbing humanity’s steadily increasing CO2 emissions since the start of the Industrial Revolution, buffering the impact of climate change. If not for the oceans, the Earth would be in far more trouble.

Indicators from deep sea sediments reflect the ocean’s storage of CO2. The total amount of carbon in the ocean is about 50 times greater than the atmosphere, and 48 percent of the carbon emitted into the atmosphere by burning fossil fuels resides in the sea, according to NASA.

“The CO2 level is 80 to 100 parts per million (pCO2) higher during ‘normal’ interglacial periods relative to glacials,” said Allison Jacobel, postdoctoral research assistant in Earth and Environmental Sciences at Columbia University.  “The question is, where did the CO2 go during glacial periods?” The leading hypothesis is that CO2 was stored in the ocean where gases dissolve. The atmosphere and ocean exchanges CO2 until an equilibrium is reached. 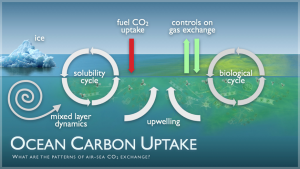 Jacobel studies uranium in seabed sediments. Uranium in the ocean is well-distributed and soluble, but when there’s a shortage of oxygen in marine sediments, uranium precipitates into a mineral form of reduced uranium and that’s how scientists know oxygen was lower and CO2 concentrations were higher in the ocean at a given time when the sediments were deposited.

“It’s an indirect way to know [what] concentration of oxygen in the ocean was like,” said Jacobel, who preented her research at the Comer Abrupt Climate Change Conference this fall in southeastern Wisconsin. “We exhale CO2, and we take in oxygen, and so we sort of have an inverse relationship between how much oxygen there is and how much carbon there is.” Her studies suggest that the glacial carbon is stored in North Pacific deep water.

“We’re trying to explore how the Earth’s system works, how it behaves, what its natural variability is,” said Jerry McManus, professor of Earth and Environmental Sciences at Columbia University. “That won’t give us all the answers to what’s going on today, but it gives us a better understanding of the various interactions.”

McManus studies the accumulation of calcium carbonate (CaCO3), a crucial building block for organisms to form their shells in the ocean, and a climate change indicator. Calcium carbonate is part calcium and carbon and so it plays an important role in the carbon cycle of the Earth.

Calcium carbonate contributes to the ocean’s alkalinity, the ability of the ocean to neutralize acid. It is essential to the CO2 uptake of the ocean because the dissolved form of CO2 is acidic. “This property of the sea allows it to absorb a great deal of CO2,”  McManus said. “The calcium carbonate in solution is what holds CO2 from the atmosphere.”

However, there is a catch.

Because the ocean has become more acidic since the industrial revolution, according to the Intergovernmental Panel on Climate Change (IPCC), the acidification causes more calcium carbonate to dissolve.This negatively impacts marine life with their shells made of calcium carbonate.. The warming and acidification of surface water also weakens the ocean’s ability to take up CO2 from the atmosphere.

Photo at top: Ocean uptake of CO2 buffers the already high levels of the greenhouse gas in the atmosphere. (Medill photo)

Note: Tiffany Chen is a Comer Scholar, a Medill scholarship program supported by the Comer Family Foundation to promote graduate study of science and environmental journalism.